From Karen Brandvold to Sam Petillo 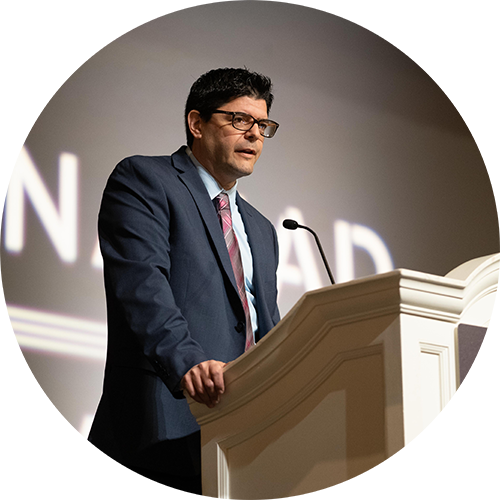 Karen’s done a terrific job leading the NAHAD organization the past year. Her passion for the industry and the NAHAD organization shines through everything she’s done. I would like to thank Karen for her leadership. I would also like to thank Molly Mullins and her team. Molly’s a rock star and she’s assembled a group of talented individuals that never rest. The programs that they maintain and the new ones that were announced at this year’s convention are a few examples of what they’ve accomplished. Until you serve on the board you never really understand how much time and energy is put into this convention and our organization.

As I take over as president today, I've reminded of all the moments of my career as well as my involvement with NAHAD that have taken me to this point. I’m not here because of what I have accomplished alone but instead, I am here because of what those around me have done for me and with me. One word comes to mind when I think about it. That word is “team”. I’ll start with NAHAD teams I’ve worked with.

All I remember about my first exposure to a NAHAD committee is sitting in a room in Baltimore, what seems like 8-9 years ago when Debbie Mitchell gathered a group of us from the standards committee to re-write the hose guidelines. I was with Goodyear at the time and teamed up with Terry Weiner, Rob Lyons, Jim Reilly, and Alex McGill. Poor Debbie had her hands full with this group of hooligans. We were strapped with the monumental task of rewriting the specification manual and fab guidelines for each product group. I swear it took us over an hour to get through agreeing on the content for air hose, sometimes battling over where a comma was supposed to be. I was in a mental coma by the time our meeting ended. Little did I know it would take a few years to fully complete the project. As grinding as it was sometimes, I’ll never trade that experience for anything. Not only did it set the stage for my first stint on the board as Chair of the Standards Committee, but it also gave me the opportunity to work with some talented people that I still consider friends and colleagues. It’s interesting to note that all of us that served on that core committee at some point served as president of NAHAD.

I’m very fortunate to be the only person to have served on the board twice, once as a manufacturer and now as a distributor. I’ve been able to use my perspective from both sides of the industry and use it on the committees I’ve chaired, like the Standards Committee, the Membership Committee and now as incoming president of the organization. It’s humbling to have worked with those teams on the board both times. They were some of the most talented people in our industry and I was able to get to know them and their spouses on a personal level and learned about the business they either owned or managed.

I’ve also been blessed to have worked for two Carver Award winners that have done a lot for me. I wouldn’t be surprised if I was the only person in this room today that can say that. Two Carver Award winners! First, Keith Collett from Goodyear, a respected industry veteran of over 40 years, received the Carver Award in 2012. Keith taught me everything about hose manufacturing and the hose business. He’s the one that urged me to get involved in NAHAD a long time ago. I currently work for Don Fritzinger who received the Carver award this year. Like Keith, Don’s been in the industry well over 40 years. He’s taught me so much about distribution the past 5-1/2 years I’ve worked with him. He’s the smartest business person I’ve ever met, and I consider him a mentor and a friend. Both Keith and Don taught me about the importance of the team—to surround yourself with talented people, work beside them and not above them, be humble, try new things, make mistakes and learn from them.

I’ve been blessed to work with great teams on the NAHAD board, at Goodyear, and I have to say how great it is to work with the team at Singer. You guys are the embodiment of the word team. You are always supporting and learning from each other. There are no egos on our team, just real entrepreneurial grit, hustle and passion for what we do every day. I’m humbled and honored to work with you and appreciate your support. We work hard together, share the same passion for success and we never forget to have fun along the way. That’s the culture that we strive to maintain. It’s core to our success and I wouldn’t have it any other way. I just read a simple quote about teamwork recently that resonated with me and reminded me of our team: “Being on a team is a privilege, not a right. You give up the right to be selfish, average and apathetic when others depend on you.” I think we all can appreciate that.

Now, on to the most important team in my life, the team that depends on me the most—my family. First, my kids after all this time my kids still don’t know exactly what I do for a living. They’ve been to a couple of NAHAD conventions and still don’t quite get it. They think I fly around the country, sit in meetings and talk, eat at nice restaurants and drink craft beer and bourbon. I guess it’s partly true, especially the bourbon part. But that’s ok. Here’s what they do know for sure—through the years I’ve missed their school events, soccer games, track meets, birthdays and the list goes on and on. But they understood and knew it was something I had to do and something I loved to do. I had their support.

My wife Traci has been my biggest supporter and has been with me during this journey. But I don’t think I’ve been pulling her along. The way I see it, she was pushing me along and inspiring me every step of the way. Seeing all the sacrifices she’s made makes standing up here at this podium even more fulfilling. It makes it more meaningful for our family and I owe her a lifetime of gratitude for that.

But the journey is certainly not over yet. We need to get three girls through college and pay for three weddings, so I think I’ll be in the rubber industry for years to come. I thank you all and will work hard during my term as president of NAHAD to continue all the great work that Karen and other NAHAD presidents have done before me.

Become a part of the community dedicated to growth and prosperity in the hose and hose accessory industry.